From The Nation: In two new books, Foucault: The Birth of Power and Foucault’s Last Decade, Stuart Elden investigates some of the unexplored aspects of Michel Foucault’s life and work. He finds hidden consistencies underpinning the body of Foucault’s writings, lectures, and activism.

“The lectures, diverging as they often do from the books that made Foucault famous, only added to the controversy. They are—along with various manifestos, unpublished drafts, interviews, and other miscellaneous writings—now also the subject of two fascinating new books by Stuart Elden: Foucault: The Birth of Power and Foucault’s Last Decade. In the former, Elden tries to soothe some of the long-standing tensions between Foucault and Marx, in part by displaying hidden continuities between Foucault’s early work on madness and knowledge and his later work on power. In the latter, Elden deals with the 10 years after Foucault finished the manuscript of Discipline and Punish and began (on the same day!) The History of Sexuality. He shows how much of Foucault’s interest in sexuality was actually an interest in governmentality, or technologies of rule. When Foucault talked about subjectivity, Elden argues, he was also talking about the formation of subjects in the political sense, or how human beings become subjected to power.” 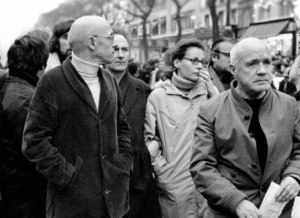