From STAT: According to a recently unsealed lawsuit, Eli Lilly has illegally hired nurses to promote its diabetes treatments to physicians and patients for the past decade.

“By doing so, Lilly avoided concerns that sales reps might get little to no face time with doctors and simultaneously helped save physicians from the expense of providing followup care, according to the lawsuit. The approach is sometimes known as ‘white coat marketing,’ which the lawsuit noted is considered problematic by authorities because it may blur trust between doctors and patients.

‘The nurses were likely to be viewed by prescribers as better credentialed and more credible than traditional drug reps and, thus, they were more likely to gain access to prescribers and their staff,’ the lawsuit stated. ‘While purporting to provide independent medical advice and disease awareness information, the nurse educators were, in reality, acting as undercover sales reps for Lilly.’

The scheme allegedly caused Medicare and Medicaid to inappropriately pay for prescriptions that were ‘tainted by kickbacks,’ according to the lawsuit, which was filed last June by a health care research firm that described itself as a whistleblower.” 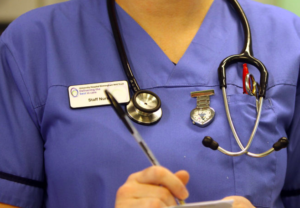