In this podcast for HealthNewsReview.org, Michael Joyce shares what he considers the 10 most compelling quotes from last year’s podcast episodes. The quotes include a wide variety of critical perspectives on the U.S. healthcare system, including the following quote about the overprescription of psychiatric drugs from psychiatrist Allen Frances:

“And so they’ve been able to market drugs in a ridiculously, outlandishly, excessive way to people who shouldn’t be on them … 13 percent of Americans are now taking anti-depressants; you look at women over 45? A quarter of them are on anti-depressants. The Attention-Deficit Disorder epidemic has us now treating about 7 percent of our kids with stimulants. And the opioid epidemic — although not strictly within psychiatry, but related — has resulted in 38 percent the population having an opioid prescription in this remarkable and horrible epidemic … So we have a diagnostic system that was meant to discipline the field, but was opened up by misleading drug company marketing. And their access to the public is an indication of the power of money. They provide about twice as much money to politicians as any other industry. And that includes the energy and insurance industries, which are no mean lobbyists themselves.” 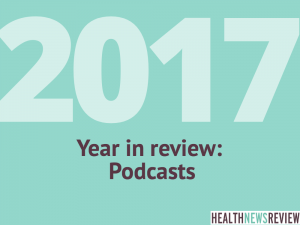