In this piece for Research with Plymouth University, Richard Byng discusses the difficulty that both doctors and patients experience in discerning the effectiveness of antidepressants in each particular case and making decisions about whether to start or continue antidepressants. He advocates for a person-centered approach to untangling the evidence.

“As a clinician, I have started being more honest about the evidence, explaining that ‘while most people get better while taking on antidepressants we won’t know if, when you are better, this is due to placebo, other positive things you are doing, the natural course of mood changes or least likely a positive effect of the drug.’ I know I am reducing the placebo response, not just for the benefits of being more honest, but because I now share Gotzsche’s serious worries about long term harms. It’s a much tougher conversation and has to be delivered with sensitivity, compassion and if at all possible with some alternative solutions.

Perhaps what is most bizarre, is that, as doctors, we find it hard to believe that chemicals which are designed to get into the brain and affect synapse function, might just have the potential to do harm, if infused continuously over months or years. Initially they cause a chemical imbalance which might feel good or bad (or more often neutral), the brain then reacts to compensate and create a new steady state (feeling better or worse) – stopping means this transition goes into some kind of reverse (sometimes with side effects), whereas continuing appears to result in some kind of neuronal structural changes, the benefits or harms of which are uncertain.

I tend to put significant physical and psychological effects reported by patients starting down to real drug side effects. My convoluted logic then thinks that if some people get worse then there probably are some people who do benefit significantly in the short term (balancing out as a marginal net average improvement). This takes us back to the quandary of whether the patient who is better has actually benefited from the drug. It’s not quite as bad as a needle in the haystack, but we should not simply interpret improvements as being down to the medication. Quite the reverse. But should we just hope that if the average effect in short term trials is slightly positive we should just continue prescribing? Guidelines suggest we should. When patients are quite clear of benefit, particularly when sustained or repeated, and nothing else good has happened in their lives which might have helped, I am more likely to believe the drug has had some positive effect, and continue to prescribe. Without such clear-cut temporal evidence of benefit, I now worry a lot about continuing to prescribe, but will normally continue if the patient requests despite sharing my concerns.” 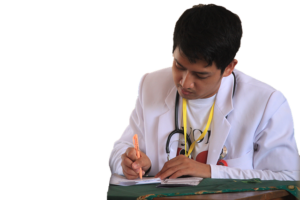