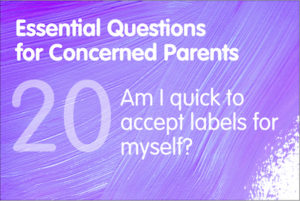 How do you describe your own difficulties to yourself and to others? Do you say things like, “Oh, I have ADD and our little Bobby has it too”? Or “Depression runs in our family”? Or “We can’t seem to get Sally’s anxiety meds right—but I have the same problem myself”?

If this is the way that you conceptualize your difficulties and the difficulties of others, aren’t you likely to nod in agreement if and when a professional were to assert that your child had a mental disorder? Wouldn’t you be inclined to nod whether or not there was any medical evidence or other evidence that your child really did? Wouldn’t that amount to a pretty automatic nod?

Educate yourself about alternate visions that reject the idea that because you have a certain experience, say of anxiety, you have a “mental disorder” and must take “medication” for that so-called mental disorder. Be a little less quick to accept such labels for yourself or for your children and do some diligent research in this area. It is easy to be seduced by the power of analogy into believing that a “mental disorder” is something like a “physical disorder,” just because they sound sort of the same. Investigate the matter and decide for yourself whether you believe that they are even slightly similar. Is “oppositional defiant disorder,” for example, anything at all like “cancer”? Be a little less quick to accept mental disorder labeling, either for yourself, a loved one, or your child.

Allen Frances and the “Overdiagnosing” of Children