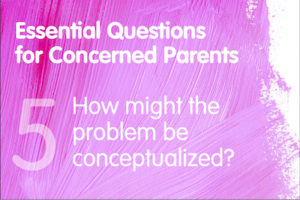 Let’s paint the following too-simple but useful picture. There are seven ways to look at what’s going on. The first is that nothing dramatic is going on and that there is no problem at all. The second is that this is a momentary aberration or transitional phase. The third is that something is “broken” in a medical or biological sense, the underlying premise of the mental disorder paradigm. The fourth is that it’s a matter of circumstance, say that he or she is being bullied in school. The fifth is that it’s a matter of original personality, like being born with lots of energy, which is now translating itself into restlessness and fidgeting. The sixth is that it’s a matter of formed personality, like becoming less confident over time because of school failures. The seventh is that it’s a result of family dynamics, like living with an abusive parent.

To repeat, this is a too-simple picture. But it’s a useful one, in part because it’s a reminder that you may be causing or contributing to your child’s distress. Therefore, you will need to deal with your natural defensiveness as you try to conceptualize what’s going on with your child. Likewise, it’s a reminder that the “broken” point of view—the mental disorder paradigm—is not the only way to think about what’s going on and many would say rarely the best way. Please consider this: surely there is more than one way to conceptualize what’s going on with your child, wouldn’t you say?

To get in touch or to share your feedback, please email us.

Psychiatry Is the Cause, Not the Solution