From Discursive of Tunbridge Wells: Psychologist Rufus May speaks about the often overlooked role of racism in the mental health system. People of color are more likely to be diagnosed with serious mental illness, overmedicated, and forcibly treated.

“Racism is the elephant in the room in mental health. Being black means being more likely to receive ‘heavy’ diagnostic labels like schizophrenia. It also means higher doses of medication and more coercive treatment than white people receive. I have worked in mental health for over 20 years now. I have seen racial inequality at its most pronounced when I walk on to the most secure (i.e. locked) wards in mental health units. There is often an over-representation of black people: usually black men. How does this happen? In 2002 the Sainsbury Centre for Mental Health’s Circles of Fear report described how mental health services (buying into stereotypes fuelled by the tabloid media), feared young black men. The result is heavy-handed treatment.  This in turn created a fear of mental health services in young black men and their families.

My own profession of psychology is also part of the problem. Aside from anything else, black people are less likely to be referred for psychological therapy. And I’ve noticed there are very few black male psychologists. On a personal level I try to redress the balance – at work I actively approach black people who are in-patients and let them know they can self-refer for psychological help. But, we need to do much more before it gets to this point. The clues to social causes of the distress and confusion that get labelled as mental illness have always been there, as for a long time black people have consistently been over-represented at the harsher end of the psychiatric system.” 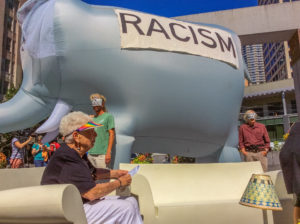