In this piece, Patrick Larkin explores the impact of war on growth and human development. A study he conducted on Hmong refugees in French Guiana revealed the developmental impact of growing up during wartimes in Vietnam.

“…the study’s main purpose was to find whether people’s war experiences might have influenced their growth. Some people had a much harder time during the war years than others. The history of the war in Laos is a remarkable story unto itself, with many factions involved from several nations. Suffice it to say here that – as in nearly all wars – civilians were severely affected, particularly those who resided close to the Vietnam border. Many people told us they experienced hunger as children, had family members who died from illness or violence, or were forced to flee from their homes multiple times because of the war, in some cases walking dozens of miles to safety.

Such experiences, especially when they occurred early in life, were correlated with how their bodies grew and developed. People who were forcibly displaced by war during the vulnerable period of infancy were significantly shorter as adults. Those who were born in a village near a conflict zone had more body fat as adults, particularly around their abdomen (a type of fat that has been linked to more adverse health outcomes). These results were consistent with other studies looking at how war, or adversity in general, can get ‘under the skin’ to influence how our bodies grow and develop.” 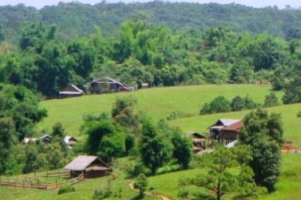