From The Guardian: “Last month, amid international outcry over his administration’s ‘zero-tolerance’ policy, which led to the separation of 2,300 children from their parents, Donald Trump issued an executive order to end family separation. But the move set the stage for another expansion of the US family detention system. On 22 June, immigration authorities asked for 15,000 more beds to be ready for detained migrants in the next couple of weeks. One week later, the Trump administration announced its policy of holding families in detention for extended periods of time.

‘This is substituting one kind of trauma for another kind,’ says the 27-year-old Angelina Márquez, who fled El Salvador in 2014 with her six-year-old son and spent two months in the Artesia family detention center in New Mexico.

Márquez said that some of the women she met in Artesia had been there for months: ‘Nobody knew how long they would be there. Nobody knew to seek asylum. Nobody knew they could see a lawyer.’

The detention center has been accused of rights abuses, poor living conditions, deficient medical and mental healthcare, and lack of detainee access to legal counsel.” 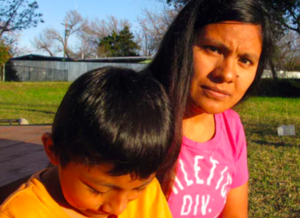