From NPR: “A Center for Public Integrity and NPR investigation found drug companies have infiltrated nearly every part of the process that determines how their drugs will be covered by taxpayers: giving free dinners and consulting gigs to many doctors on the obscure committees advising state Medicaid programs; asking speakers who don’t disclose their financial ties with drug companies to testify about their drugs; and paying for state Medicaid officials to attend all-inclusive conferences where they can mingle with drug representatives.

Beyond that, drugmakers use other tactics to get their products paid for by the Medicaid programs: lobbying state lawmakers to achieve their goals or helping doctors fill out extra paperwork to get Medicaid to pay for the costlier drugs as Warner Chilcott did. The result is that Medicaid sometimes spends more than necessary and may pay for medicines inappropriate for patients.” 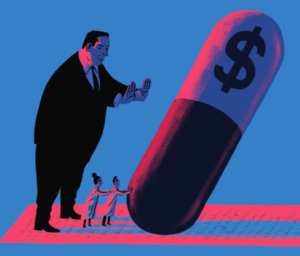