From The Guardian: “Police shot Mack, a 30-year-old father of two, in the middle of a mall on the afternoon of 10 April, as he was holding a kitchen knife and having a mental health crisis. Less than 24 hours later, officers arrived at a park and killed Kenneth Ross Jr, another black resident who struggled with mental illness and was said to be fleeing when police shot him with a military-style rifle.

The two families, brought together by Black Lives Matter the day of Ross’s death, are now channeling their grief into a fight for justice – taking on one of the country’s deadliest police systems, where law enforcement killings of black mentally ill residents are so normalized, families struggle to be heard. They face an uphill battle in the most secretive state in the US for police misconduct, in a region where officers who shoot are never prosecuted.” 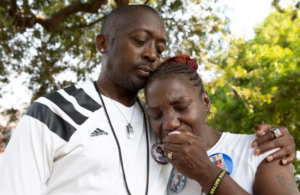