From Good Times: “The news that Second Story Peer Run Respite House—Santa Cruz’s only alternative to inpatient psychiatric hospitalization—is closing its doors at the end of November is hitting guests like Neuman, as well as the program’s 14 staffers and other members of the mental health community, extremely hard.

‘The funding for Second Story is no longer available,’ Santa Cruz County Mental Health Director Erik Riera wrote to county staff in an Aug. 23 email. ‘The decision to close Second Story was very difficult for me as the county behavioral health director, as we have been very invested in building and expanding peer services in our community.’

Many leaders in Santa Cruz County’s mental health system are angry about the decision to close Second Story.

‘It was essentially done behind closed doors, so to the community it came as a brutal shock,’ says Yana Jacobs, who was instrumental in establishing Second Story a little over eight years ago. ‘And the closure notice is such a short time frame. A few months. This announcement has been traumatic, and people are having difficulty processing it.'” 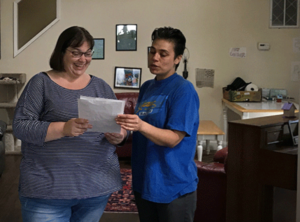 Building a Support Network for Peer Workers in NYC