From Medium: “We tend to think of the Myers-Briggs Type Indicator as a frivolous internet distraction, akin to the hundreds of BuzzFeed quizzes that help us pass the time and think about ourselves in new (if not especially serious) ways. But in the mid-20th century, businesses used it as a powerful tool in hiring and management, changing the trajectories of many workers’ lives. What most of these businesses’ executives didn’t know was just how arbitrary the ‘science’ behind the indicator was.

The Myers-Briggs Type Indicator was the brainchild of a mother and daughter, Katharine Briggs and Isabel Briggs Myers. They had no formal background in psychology or statistics, but they did have a fervent belief that their experiences as mothers and wives had taught them all about the innate, immutable power of personality types. Born in 1875, Katharine Briggs had always been fascinated by the idea of personality. She became a minor celebrity in the 1920s while writing parenting columns about how she educated her daughter, Isabel. When Isabel left for college, Katharine fell into a deep depression. It was then that she discovered the writings of Carl Jung, whom she called her ‘savior,’ her ‘maker,’ the ‘author of her life.’ Over time, Katharine developed a way of categorizing people’s personalities using a variation of Jung’s theory of psychological types: introversion/extraversion, intuition/sensing, feeling/thinking, and to this she added perception/judging.

Her system never really caught on until her daughter, Isabel Briggs Myers, developed it into a 117-question marketable ‘indicator’ — never a ‘test,’ since there were no right or wrong answers, no good or bad types. Myers sold it to Edward N. Hay, a family friend and one of the first personnel consultants in the United States. With the rise of the labor force during and after World War II, newly established consultancies like Hay’s were warming to the idea of using cheap, standardized tests to fit workers to the jobs that were ‘right for them,’ a match made under the watchful eyes of executives eager to keep both profits and morale high.” 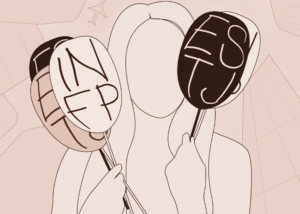 Nah. Must Be a Chemical Imbalance