From The New York Times: “‘I have been in some pretty horrendous camps and situations,’ said Louise Roland-Gosselin, who is head of mission in Greece for Doctors Without Borders and spent five years in crisis zones in Congo and South Sudan. ‘I have to say that Moria is the camp in which I’ve seen the highest level of suffering.’

The group’s lead psychiatrist on Lesbos, Alessandro Barberio, said he had never seen such overwhelming numbers of severe mental health cases. Of the roughly 120 people his team has the capacity to treat, the vast majority have been prescribed anti-psychotic medication.

‘Moria has become a trigger for an acute expression of psychosis and post-traumatic stress disorder,’ Dr. Barberio said.

The International Rescue Committee, an aid group with a smaller presence on the island, said that just under a third of the 126 people its psychosocial workers have assessed at Moria since March have attempted suicide.

The majority of the camp’s residents are Syrian, Iraqi and Afghan refugees, many of whom have suffered wartime traumas that are then exacerbated by the overcrowded and static conditions, which fuel their despair.” 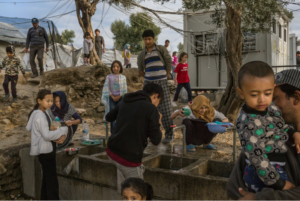