From King5.com: “The lawsuit says Dr. Robert Koblin and his Beverly Hills office ‘negligently and repeatedly’ prescribed ‘dangerous mind-altering controlled substances to [Soundgarden frontman] Chris Cornell which impaired Mr. Cornell’s cognition, clouded his judgment, and caused him to engage in dangerous impulsive behaviors that he was unable to control, costing him his life.’

It focuses in particular on Koblin’s prescribing Cornell large amounts of Lorazepam — which is sold under the brand name Ativan — to Cornell in the 20 months leading up to his death. […]

The lawsuit says the doctor knew that Cornell had a serious history of substance abuse, and he failed to examine or consult with him as he was prescribing the drugs.

The ‘unmonitored use of such excessive amounts of Lorazepam … was known to increase the risk of suicide because it can severely impair judgment, thinking and impulse control and diminish the ability of a patient to think and act rationally,’ the lawsuit says.” 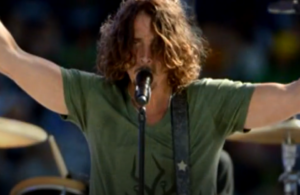