From The Florida Times-Union/jacksonville.com: “[The family’s lawyer Greg] Lauer, of Fort Lauderdale, filed suit in federal court on Thursday, naming the sheriff’s private healthcare provider and its employees, including doctors and nurses, as defendants.

‘The unconscionable and callous conduct of the defendants, in this case, is indefensible both legally and morally and cannot be tolerated in our civilized society,’ Lauer wrote in his complaint. […]

If she had been told her son was starving and dehydrated from vomiting so much, Vicki said, she would have driven Greg to the hospital herself.

‘I didn’t know what to do,’ Futch said. ‘I thought, “Well surely they are going to take care of him, and if he needs medical help they will take him.”‘

Vicki spends much of her days now saddled with guilt, wishing she had never called the police. She said Greg ‘didn’t do a thing to deserve to be in jail, not a thing.’

‘We took care of each other when we went through a bad time, and I would try to do everything I could,’ Futch said. ‘This last time, I just went to the wrong people for help.'” 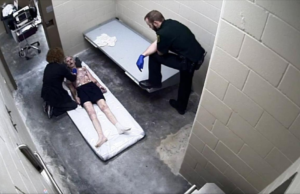