From The Guardian: “Doctors say that recent migrants often complain of headaches, chronic pain, sleeplessness, feelings of sadness, and experience catatonic depression. Immigration attorneys in the Rio Grande Valley talk about clients who are so traumatized they’re nearly impossible to represent. ‘They just can’t focus,’ one lawyer said. ‘They have trouble understanding the law, doing interviews, just being present.’ […]

For adults and children alike, one of the most overlooked stressors comes from loss, says Dr. Selma Yznaga, associate professor of counseling at University of Texas Rio Grande Valley, who works with recent arrivals. It’s the crushing loss of identity and culture after fleeing their homes into a liminal wilderness, and the loss of dignity from being a stranger, from being robbed, raped or kidnapped.

‘One of the mediating factors in ACEs is how strong an identity you have,’ Yznaga says. ‘If your identity and dignity are stripped by the journey, then you’re even more vulnerable to trauma.’

Worse, she says, once they arrive, ‘There’s another loss, this dream that once they get to America everything is going to be OK, and it’s not. It’s a dream they’ve had for generations, this land of milk and honey, and it’s shattered. Once here, they’re just treated like trash.’ […]

All through the Valley, ICE agents are showing up in places once deemed safe: court hearings, emergency rooms and at mobile clinics that service the poor, people told me. The sick and elderly aren’t going to the doctor for fear of being stopped along the roads. At El Milagro Clinic in McAllen, the manager, Margarita Alvarez, says there’s been a decrease in indigent patients. Even a trip to the supermarket strikes paranoia.

Meanwhile, children, fearing parents could be snatched away, stew in their toxic stress and become unhinged. One woman tells me her daughter screams, ‘Kill them! Kill them!’ whenever she sees police, after her father was deported. She hyperventilates when she hears sirens, wakes up screaming in her bed, and has become violent in school. She’s four years old.

‘This administration has led to the rise of people feeling hunted,’ says Martha Sanchez, community organizer with La Union del Pueblo Entero (Lupe) in nearby San Juan. ‘Look at how much damage we’re causing them. There’s a ton of kids here who need therapy.’” 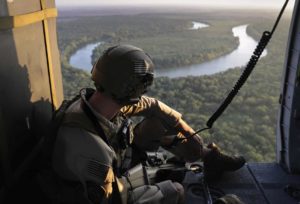