From Bustle: “‘Emotional abuse is often used interchangeably with the term psychological abuse,’ Carolyn Cole, LCPC, LMFT, NCC, tells Bustle. ‘Although the term “abuse” often makes one think of physical abuse, emotional abuse is abusing someone in ways that can be seen as traumatic.’ Cole says this may include gaslighting, bullying, and/or being condescending. ‘It is making someone feel like they are less-than, worthless, or not good enough. This can be incredibly painful when a parent does this to a child, as a child trusts that a parent is going to love them unconditionally.’

Cole adds that if you had an emotionally abusive parent, it could have an impact on your interpersonal and romantic relationships. ‘Attachment styles in relationships as an adult are often based on experiences someone has while growing up,’ she says. ‘As a therapist, I often will explore the relationship a person had with their parents to understand where this way of relating to others or a romantic partner might stem from if I’m picking up on a particular attachment style.’

Cole says that once someone is able to understand what they experienced — if and how their parent was emotionally abusive — they can become aware of how this experience impacts them as an adult. Then, they can work with a therapist to make changes in the way they interact with others. If you’re curious about signs that you had an emotionally abusive parent, below, experts weigh in.

1. They Were Overly Moody

2. They Were Overly Critical & Negative Toward You

3. They Invalidated Or Dismissed Your Emotions

5. They Were Overly Anxious

7. They Gave You The Silent Treatment

8. They Were Physically Present, But Emotionally Absent

9. They Were Over-Involved In Your Life

10. You Blame Yourself For Other People’s Bad Behavior

12. Deep Down, You Feel Anger Toward Your Parent(s)

13. You Still Fear How Your Parent Will React To Most Of Your Decisions

14. You Try To Manage Your Partner’s Emotions

15. You’re In A Toxic Relationship” 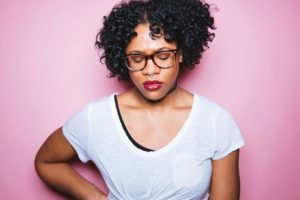