From MEL: “Day two off the drugs, however, sent everything crumbling down. He could barely walk from his car into his office because of vertigo, a common withdrawal symptom. He felt a painful pressure against the back of his eyes, like Clarke. Most frightening of all was the cold, random wondering about suicide. On day three, Mike experienced an out-of-body sensation as he walked up the stairs, into the kitchen, and put a butcher knife in his hand. ‘I had only taken antidepressants for three months, so I thought quitting cold turkey wouldn’t be a huge deal. But those two weeks following that decision were extremely, extremely hard for me,’ he says. ‘Every second it feels like you’re going to die. I had to go back to a quarter-dose and learn how to taper down.’

May 15, 2018 is the day that Mike quit Paxil for good, and the following four months brought more ‘bad trips’ where he felt disassociated from his body and like he was floating through a bizarre parallel universe. Thankfully, the only lingering symptom as of late is random spurts of vertigo. Mike is grateful to feel like his old self again, but is shaken by how badly things went. ‘I did try to get advice from my doctor about what was going on, but there’s no universal understanding of how to manage this. Even tapering is unpredictable,’ he says. ‘It’s hell, man, to not know what you’re getting yourself into, and you’re left with more questions than answers when trying to quit. It’s the worst position you can be in.’

Suicidal ideation, aggression and violent thinking are the most severe and dangerous side effects of antidepressant use, and developing research suggests that SSRI use can actively raise the chances of violent behavior among patients. The fix, in theory, is consistent monitoring and communication with one’s doctor in order to quash dangerous symptoms. But real-life patients like Clarke and Mike say that asking questions has either left them feeling dismissed, stupid or like they’re wasting their doctors’ time for an answer that won’t address their specific needs. Many are pushed to internet forums and medical journals to figure out, for themselves, how a successful withdrawal from antidepressants is supposed to work. In turn, trial and painful error becomes a fact of life.” 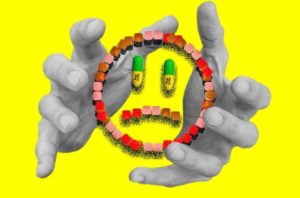