Two articles discuss the root cause of much of mental ill health and societal dysfunction that typically goes unseen or covered up in mainstream explanations of mental health and behavior.

From the Institute for Attachment and Child Development [an adoption support organization]: “Homelessness, addiction and child neglect—these are just a few of the issues that impact our communities all over the world. And while many people develop policies and programs to remedy these problems, they just don’t go away. That’s often because they don’t understand the primary root of these issues. Once we understand the problem as a society, we can collectively work on the remedy. This is why you and everyone you know needs to understand developmental trauma disorder.

Developmental trauma disorder (DTD)—Coined by Dr. Bessel van der Kolk, DTD describes the effects of long-term exposure to trauma—typically profound abuse and neglect by caregivers (but can include traumatic medical procedures or community violence)—during the first three years of life.

Early trauma negatively impacts the brain and neurobiology during critical periods of development and results in:

Without early and effective intervention, children with DTD struggle to function in relationships and society into and through adulthood.”

“The Disorder That Affects Us All: What You Need to Know About Developmental Trauma Disorder” Article →

Response from the Colorado Professional Development Center: “Here’s a big thank you to Nicole Noonan for her great article, ‘The Disorder That Affects Us All: What you need to know about developmental trauma disorder’! Nicole, who works at the Institute for Attachment & Child Development, does a great job of describing critical elements of DTD. However, she missed what I think is the MOST important point: identifying the primary cause of Developmental Trauma: DISORGANIZED ATTACHMENT.

‘You can’t fix it unless you know how it got broken.’

This old saying is paramount for those like Nicole and many thousands of other caring professionals who recognize just how pervasive Developmental Trauma is in our American culture. So let’s take a deeper look at it.” 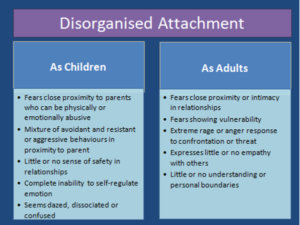