From CounterPunch: “In various forms, this troubling dichotomy has appeared again and again in the years since the 9/11 attacks. On the one hand, at times the APA has taken public stands on key perils and injustices associated with issues such as climate change, poverty, racism, gun violence, consumerism, and immigration. But when the focus shifts to conquering the third of Martin Luther King’s ‘giant triplets of racism, extreme materialism, and militarism,’ the APA turns silent, or worse. With large segments of the American public so readily and regularly enticed by the bipartisan glorification of war and all things military, the world’s largest association of psychologists could play an important moderating and cautionary role. Unfortunately, the APA instead often acts like the ‘impaired professional’ who is unable (or unwilling) to intervene because they too suffer from the same addiction. Here are several examples. […]

Breaking Free from the Addiction

There are undoubtedly multiple reasons why the APA seems to lose its scientific rudder, moral compass, and independent voice in the military-intelligence arena, where violence, domination, and oppression are too often the preferred tools of U.S. foreign policy. Perhaps it is in part because the Department of Defense is a valued employer of psychologists, a significant funder of psychological research, and a key source of internships for graduate students in clinical psychology. As well, in influential circles strong connections with the Pentagon can bring an organization considerable stature and a proverbial ‘seat at the table’ for policy deliberations with national and international ramifications. And we should not overlook the reality that, when couched as ‘patriotism,’ calls to action—and obedience—are never easy to resist for individuals or groups. After all, that is why they have been standard fare for demagogues across time and place.

But what does the mission of ‘advancing psychology to benefit society and improve people’s lives’ truly mean if the APA refuses to counter fearmongering propaganda, the manipulative nurturing of enemy images, and the misuse of military might? The consequences of our failure to rein in these forces are stark: nearly 800 overseas military bases; massive weapons expenditures that hinder urgent domestic spending needs; assertions of exceptionalism that encourage a disturbing disregard for the lives and suffering of non-Americans; and unencumbered power for narrow interests that may find the threat and spoils of war far more profitable than diplomatic success or lasting peace.” 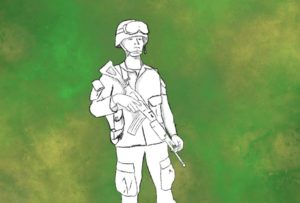