From The History Channel: “From the 1910s through the 1950s, and in some places into the 1960s and 1970s, tens of thousands—perhaps hundreds of thousands—of American women were detained and forcibly examined for STIs. The program was modeled after similar ones in Europe, under which authorities stalked ‘suspicious’ women, arresting, testing and imprisoning them.

If the women tested positive, U.S. officials locked them away in penal institutions with no due process. While many records of the program have since been lost or destroyed, women’s forced internment could range from a few days to many months. Inside these institutions, records show, the women were often injected with mercury and forced to ingest arsenic-based drugs, the most common treatments for syphilis in the early part of the century. If they misbehaved, or if they failed to show ‘proper’ ladylike deference, these women could be beaten, doused with cold water, thrown into solitary confinement—or even sterilized.

The American Plan began during World War I, as the result of a federal push to prevent soldiers and sailors from contracting STIs. In 1917, federal officials were horrified to learn that a huge percentage of men in the military (some erroneously estimated one in three) were infected with syphilis or gonorrhea. Suddenly these diseases presented not just a health threat—but a national security threat as well. So officials passed a federal law that outlawed sex work within a five-mile ‘moral zone’ of every military training camp in the country. When they learned that most infected soldiers and sailors actually contracted their STIs back in their hometowns, they worked to expand this prohibition to cover the entire nation. And when they discovered that most of the women who supposedly infected the men weren’t professional prostitutes, they expanded the program even further.” 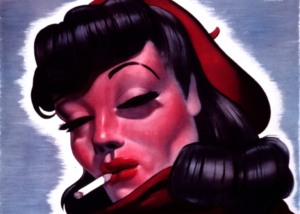