From WBUR: “Robin Wallace thought her years of working in addiction treatment gave her a decent understanding of the system. She had worked in private and state programs, and with people who were involuntarily committed to treatment.

So in 2017, as her 33-year-old son, Sean Wallace, was still struggling after years of coping with mental health and substance use issues, she thought she made the right choice in forcing him into treatment.

Now she thinks that contributed to Sean taking his own life. […]

Sean says he was traumatized. In an interview in 2017, Sean described what he went through as ‘torture’ — especially at Bridgewater.

‘I feel scared all the time,’ Sean said then. ‘I feel like this is just a dream and I’m going to wake up and be back there. I shake a lot and I’m just not the same as when I went in there.’

‘I couldn’t sleep or eat or even be in my own skin,’ Sean said in 2017. ‘I was kicking methadone and drugs, I was hallucinating. It was the worst experience of my life. Here I was — not having committed any crime — in the hole and being harassed by really dangerous people.'” 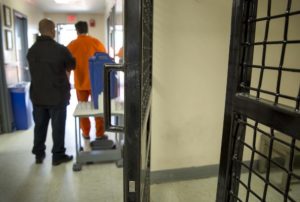