From ABC Australia: “Over the past decade, humans have been submitting themselves to a vast and disorganised global experiment: what happens when we take a brain and nervous system that’s evolved for running away from cheetahs, and give it a big glowing screen showing all the bad news in the world? […]

‘I think with the advent of the internet our world has become so much bigger than what used to be our local news via TV, radio and newspaper,’ Hack listener Jenna texted us this week. […]

After the Boston Marathon bombing in 2013, three psychologists looked at what caused more acute stress: being at or near the bombing itself, or being exposed to it in the media.

They found ‘[r]epeated bombing-related media exposure was associated with higher acute stress than was direct exposure.’ Being exposed to the media was more stressful. […]

Consuming all the bad news you can find is not a duty, says Dr Susie Burke, a psychologist who has worked on how negative news can affect us.

‘We don’t want people to switch off from being engaged in world affairs, but just listening to media stories of world events doesn’t actually change them.

It isn’t doing anything about them, it’s not solving them.

There’s no imperative we be plugged in all the time.'” 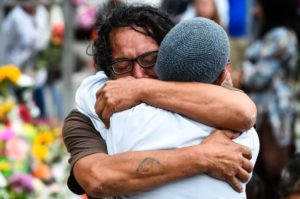