From Monthly Review: “In capitalist society, biological explanations dominate understandings of mental health, infusing professional practice and public awareness. Emblematic of this is the theory of chemical imbalances in the brain—focusing on the operation of neurotransmitters such as serotonin and dopamine—which has gripped popular and academic consciousness despite remaining largely unsupported. Moreover, reflecting the popularity of genetic reductionism within the biological sciences, there has been an effort to identify genetic abnormalities as another cause of mental-health disorders. Nonetheless, explanations based on genomics have also failed to generate conclusive evidence. While potentially offering illuminating insights into poor mental well-being in specific cases, biological interpretations are far from sufficient on their own. What is abundantly clear is the existence of significant social patterns that elucidate the impossibility of reducing poor mental health to biological determinism.

The intimate relationship between mental health and social conditions has largely been obscured, with societal causes interpreted within a bio-medical framework and shrouded with scientific terminology. Diagnoses frequently begin and end with the individual, identifying bioessentialist causes at the expense of examining social factors. However, the social, political, and economic organization of society must be recognized as a significant contributor to people’s mental health, with certain social structures being more advantageous to the emergence of mental well-being than others. As the basis on which society’s superstructural formation is erected, capitalism is a major determinant of poor mental health. As the Marxist professor of social work and social policy Iain Ferguson has argued, ‘it is the economic and political system under which we live—capitalism—which is responsible for the enormously high levels of mental-health problems which we see in the world today.’ The alleviation of mental distress is only possible ‘in a society without exploitation and oppression.’

In what follows, I briefly sketch the state of mental health in advanced capitalism, using Britain as an example and utilizing the psychoanalytical framework of Marxist Erich Fromm, which emphasizes that all humans have certain needs that must be fulfilled in order to ensure optimal mental health. Supporting Ferguson’s assertion, I argue that capitalism is crucial to determining the experience and prevalence of mental well-being, as its operations are incompatible with true human need. This sketch will include a depiction of the politically conscious movement of users of mental-health services that has emerged in Britain in recent years to challenge biological explanations of poor mental health and to call for locating inequality and capitalism at the heart of the problem.” 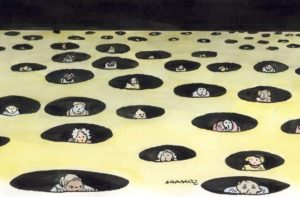