From Scientific American: “Brand-new evidence from the archives has cast this classic study in a fresh light. Nearly a half century after the original experiment, the Stanford library made a range of materials from the experiment available for analysis. As a result, scholars were finally able to listen to audio tapes of the prisoners receiving instructions from the experimenters. These materials suggest a shockingly different explanation for the vicious behavior in the original experiment.

As we explain in a forthcoming paper in the American Psychologist, this new evidence makes it very clear that merely assigning people to play the role of prison guards did not lead them to engage in cruelty naturally, of their own accord. Instead, the tapes provide clear evidence that the experimenters in charge of the ‘prison’ used psychological tactics to persuade reluctant guards to adopt an aggressive style in their interactions with the helpless prisoners.

In one recording, the prison ‘superintendent’—a member of the research team—meets with one of the guards who was reluctant to engage in cruelty towards the prisoners. The guard says ‘We noticed this morning that you weren’t really lending a hand … but we want to get you active and involved because the guards have to know every guard is going to be what we call a tough guard.’ The guard repeatedly resists the pressure to engage in the harsh treatment of the prisoners . . .

The superintendent then framed toughness towards prisoners as necessary for the achievement of a virtuous shared goal to help revolutionize the prison system. He says ‘We’re not trying to do this just because we’re sadists,’ and then supplies a rationale for harming the prisoners: ‘If you need an excuse, and I think most of us do really, it is so we can learn what happens in a total institution.… And we want to know about them. So that we can, we can get on the media and, um, and, and into press with it. And, and, and say “Now look at what, what this really about.”‘

But you do not need to take our word for it. The audio tape we quoted can be accessed directly online. For the first time, people can be flies on the wall to learn what happened behind the scenes in one of the most famous experiments in psychology.” 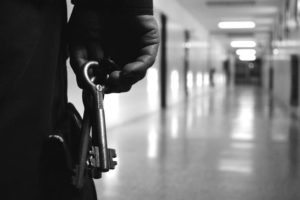