From Mosaic: “[Aboriginal psychologist Pat] Dudgeon believes many lessons can be learned about grief and trauma from the loss of land and culture that Aboriginal people have experienced. She says psychology can move away from the Western tradition of expert and patient, towards a more narrative form based on Aboriginal traditions and reconnecting with the land . . .

‘If the land is sick, you are sick,’ says Fiona Livingstone, who manages a suicide prevention programme at the University of Newcastle’s Centre for Rural and Remote Mental Health.

She explains that the traditional Aboriginal concept of health is much broader than that of conventional Western medicine. Aboriginal people, she says, are deeply connected to ‘country’, the place with which they have spiritual ties. The personal, social and ecological are closely interconnected: ‘health’ is the state in which they are all in balance . . .

Dealing with feelings of despair can be complicated. The traditional expert–patient relationship of psychological treatment has often been seen by Aboriginal people as being based on that of the colonial master and the colonised . . .

Dudgeon says that . . . for those who want to build their emotional resilience, the use of ancient rituals, reminding people of their history and creating a sense of belonging, can be powerful. ‘Strengthening culture and a strong sense of self is certainly an important part of . . . wellbeing,’ she adds.” 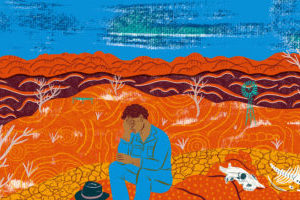