I first encountered the idea of ‘mental illness’ and psychiatric treatment as a child of about five years old. My oldest brother John had been hospitalized after suffering a nervous breakdown when he was away at college. I remember what he was like when he visited us in the middle of treatment and what he was like after he was released. I have no memory of him before he left for college.

John never spoke of his experience, but he gave me a copy of Ceremonial Chemistry by Thomas Szasz when I had reached the passage of college life. It was an eye-opening read and provided me with the kind of skepticism I needed in order to survive my own experience with psychiatry later in life. Szasz was a professor of psychiatry who recognized the pseudoscience in the discipline. As an engineering student I appreciated his frank assessment of his own profession.

During my young adult years I suffered from depression, but it was never severe enough to keep me in bed. School work and professional work were therapeutic for me. They took my mind away from the discomforts of my personal thoughts. They gave meaning to my existence. I also sought solace in soft substances such as cannabis and alcohol. My relations with women were even more helpful than either work or drugs.

At the age of 39 with the prospect of a new century and millennium on the horizon, I went through an intense period of existential crisis. My partner and I had committed to raising her two beautiful babies together. Katya and Emil were approaching their first birthday. I felt an intense urge to make their world better than the world in which I was raised. With some deep study I felt I had what I needed in order to act. I realized that with what I knew and who I knew I could quit work as an engineering manager and work on building a better world using education.

The bee in my bonnet was the knowledge that my educational work would be violently resisted by entrenched interests. It would threaten the status quo which always meets with a violent reaction. The need for security was not just my own, but extended to Katya and Emil.

The stress of the situation overwhelmed me to the point where I was in great distress in a public place. When the police arrived my anxiety level went through the roof. Police have never played a benevolent role in my life. I said some things that I should not have said, but which probably angered the police. They hauled me off to San Francisco General Hospital for a psychiatric evaluation.

I spent the next 72 hours locked up under a 5150 hold. From SF General I was transferred to John George Hospital in the East Bay. By the time the admissions staff member there interviewed me I was rather sedate compared to my condition at the time of the arrest. The intake staff member asked me what the problem was, so I told him my concern for the safety of the children given my new endeavor to improve things. He spoke to me in a demeaning tone, saying that I was paranoid. This angered me to the point where I told the man he was a charlatan and asked to speak to his supervisor. To me paranoia is a fear for personal safety, not the fear for the safety of the children in one’s care.

I realized later that being called paranoid caused me to react in a way that a paranoid person might react. This did not improve my standing in the eyes of the clinicians, but it also did not improve the standing of the clinicians in my own eyes. What if other people are considered paranoid when they are merely concerned for the safety of others? How much of patient behavior is a reaction to treatment? Only a Stoic would tolerate such nastiness with equanimity. When I recount this part of the story to other mental health professionals, they sometimes remark that the intake interviewer conducted himself in an unprofessional manner.

I only spent about 24 hours at John George before being transferred to Fremont Hospital. I made the most of that time by connecting with other patients to the best of my ability. One man was under observation for expressing a suicidal ambition following a serious accident. He told me of his frustrations with his love life and his deteriorating relations with his parents. I counseled him that he might be better off not sharing his suicidal thoughts with health care professionals or the police. Just keep it between friends. After talking with a psychiatrist he reported that he had been diagnosed as psychotic and would have to take medication for the remainder of his life. He did not come across as out of touch with reality, just distraught.

An African nationalist paced the floor muttering violent aspirations against white people. When I first offered to explain the white mindset to him, he ignored me. Eventually he sat at the table and let me speak my mind on the topic. We bonded well enough to shoot baskets in a small basketball court later that afternoon. He was released later in the day.

My interaction with the staff there was rather cursory. During a group therapy session the question of stress management came up. I replied that I deal with stress by taking a long hike in the wilderness. The therapist chuckled as if to convey the idea that such a thing would not be available there. I later learned that such hikes promote mindfulness and metabolize stress hormones.

The psychiatrist on duty did nothing more than administer a psychological assessment survey. He gave me no information on what they believed my condition to be, nor did he speak of taking drugs.

My time at Freemont Hospital was equally brief. They put me in a room with a man accused of sexual assault. His nocturnal restlessness prevented me from getting adequate sleep. I sang to him in an effort to calm him down. This may have been of some benefit.

During the day I socialized with a few of the other patients. One woman told a horror story about being beaten and left for dead. She had been in the military and had told her story of being denied a pension in an internet venue. This precipitated the attempt on her life. She complained that psychiatrists did not take her seriously. One might be tempted to side with the doctors on a case like this, but other such cases have been documented by psychiatrists themselves.

Another patient I talked with said that she was bipolar. I was unfamiliar with the term. I later learned about how manic depression was relabeled bipolar and that there is another condition also called bipolar, but falls short of mania.

From there, I was transferred to Herrick Hospital in Berkeley, California for the third night of my 72-hour hold. My partner brought me food from the outside. I slept much better that night and suspected the outside food had something to do with it. Perhaps there was something in the hospital food that did not sit well with me. When I openly expressed this idea the staff considered it to be an example of paranoid thinking. What I considered generally bad food they took as a fear of being poisoned.

During the court hearing this was used to justify extending my stay for another fortnight under the 5250 commitment law. The whole experience seemed like a comedy of errors. All the time I had the work of Thomas Szasz in mind. When I later read about the Rosenhan study I saw the same absurdity there.

I made the best of my stay and tried to support the other patients as much as possible. They seemed more grounded than the staff members. One by one they were discharged ahead of me. The psychiatrist continued to try to get me to take drugs, but he could not make a compelling case for taking them. He said that they would prevent me from experiencing another crisis. I said that if that kind of thing happened again, I would go someplace quite to calm down. I was eventually granted the privilege of going outside for fresh air. Art therapy and group therapy were positive experiences for me. Other patients expressed appreciation for my support.

With everyone leaving I quipped that the only people left were “us wackos.” I was soon discharged after that against medical advice. When I later learned that “lack of insight” was a significant feature of psychosis, I wondered if my remark about myself as a wacko may have been considered evidence of not being out of touch with reality. For me the only people there who were truly out of touch with reality were staff members. All of the patients were very present, albeit in some distress. The reasons for their distress were not unreasonable.

Although I was prepared to contend with the medical side of psychiatric care, I was fully unprepared for the legal side of the institution. My knowledge of psychiatric pseudoscience was greater than my knowledge of the unjust commitment regime. It was the first time in my life hearing of 5150 and 5250. Unlike the Rosenhan participants, I lacked a background in the basics of psychological terms. All I knew was that my fear of retaliation against the children should not be construed as paranoia.

Overall I learned a great deal during my hospital adventure. Things were not as bad as the conditions that existed in hospitals during my brother’s hospitalization, but there was clearly room for improvement. The experience paved the ways for my work in a variety of peer support roles. My experience with hospitalization has shaped much of my work since then. Before the hospitalization I saw an excellent opportunity to work in adult remedial education, but I did not realize that education on the detrimental aspects of psychiatric treatment would be part of that work. The world is not as good as I would have liked, but our school has made an impact. Emil and Katya suffered just as I had feared, but more at the hands of the people I least expected. 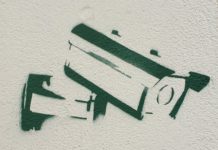 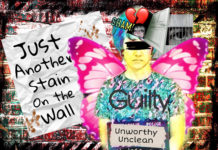 Not Just Another Stain on the Wall