From The Washington Post: “This is what happens inside children when they are forcibly separated from their parents.

Their heart rate goes up. Their body releases a flood of stress hormones such as cortisol and adrenaline. Those stress hormones can start killing off dendrites — the little branches in brain cells that transmit mes­sages. In time, the stress can start killing off neurons and — especially in young children — wreaking dramatic and long-term damage, both psychologically and to the physical structure of the brain.

‘The effect is catastrophic,’ said Charles Nelson, a pediatrics professor at Harvard Medical School. ‘There’s so much research on this that if people paid attention at all to the science, they would never do this’ . . .

The reason child-parent separation has such devastating effects is because it attacks one of the most fundamental and critical bonds in human biology.

From the time they are born, children emotionally attach to their caregiver and vice versa, said Lisa Fortuna, medical director for child and adolescent psychiatry at Boston Medical Center. Skin-to-skin contact for newborns, for example, is critical to their development, research shows. ‘Our bodies secrete hormones like oxytocin on contact that reinforces the bond, to help us attach and connect,’ Fortuna said.

A child’s sense of what safety means depends on that relationship. And without it, the parts of the brain that deal with attachment and fear — the amygdala and hippocampus — develop differently. The reason such children often develop PTSD later in life is that those neurons start firing irregularly, Fortuna said. ‘The part of their brain that sorts things into safe or dangerous does not work like it’s supposed to. Things that are not threatening seem threatening,’ she said.

Research on Aboriginal children in Australia who were removed from their families also showed long-lasting effects. They were nearly twice as likely to be arrested or criminally charged as adults, 60 percent more likely to have alcohol-abuse problems and more than twice as likely to struggle with gambling.

In China — where 1 in 5 children live in villages without their parents, who migrate for work — studies have shown that those ‘left-behind’ children have markedly higher rates of anxiety and depression later in life.

Other studies have shown separation leading to increased aggression, withdrawal and cognitive difficulties.” 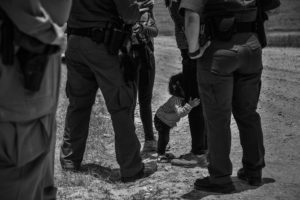