From NationSwell: “Storycatchers Theatre — also known as Storycatchers — is a nonprofit musical theater group that works with justice-involved youth in Chicago. Through programming both inside and outside of the justice centers, children and young adults turn their life stories into musicals.

The young actors and actresses perform for a wide variety of audience members, including elementary school students, community members, judges, legislators and police officers. Last year, the nonprofit worked with 228 young people and hosted 127 performances inside and outside of juvenile detention centers, for over 5,000 audience members.

‘It’s kind of a dual-purpose program, these young people have a place to tell their story, to be heard, to be validated, to find coping mechanisms in order to move on from their trauma,’ Tory Davidson, Storycatchers’ community engagement manager, told NationSwell. ‘But then also we organizationally find platforms for young people’s voices to be heard and for them to inform people of power’ . . .

The Storycatchers team believes that trauma is the core reason that individuals end up in the justice system. Researchers have found a link between crime and unresolved trauma. So by telling and performing their story, they learn from the trauma and overcome it, said Shah.

The playwrights, writing about their own experiences, perform in their shows but never as themselves. They assume the role of their mothers, their grandfathers, a police officer or friend, for example. The idea is for them to experience their own situations from a new perspective. 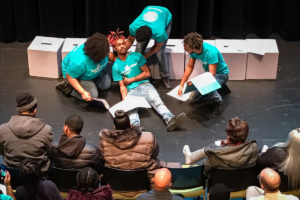