From the International Consortium of Investigative Journalists: “The United Nations special rapporteur on torture has said that solitary confinement should be banned except in ‘very exceptional circumstances’ and that isolation for more than 15 days constitutes ‘inhuman and degrading treatment.’ The mentally ill should never be put in isolation, the rapporteur said.

ICE’s own directives say that isolating its detainees — who under federal law, aren’t considered prisoners and aren’t held for punitive reasons — is ‘a serious step that requires careful consideration of alternatives.’

An investigation called Solitary Voices by the International Consortium of Investigative Journalists and partners in five countries has found that rather than as a last resort, ICE uses isolation as a go-to tool to manage and punish even the most vulnerable detainees for weeks and months at a time.

ICIJ’s reporting, which included a groundbreaking review of more than 8,400 reports describing placements of ICE detainees in solitary confinement, found that the immigration agency has used isolation cells to punish immigrants for offenses as minor as consensual kissing and to segregate hunger strikers, LGBTQ detainees and people with disabilities.

In nearly a third of the cases, detainees were described as having a mental illness, a population especially vulnerable to breakdown if locked up alone in a small cell. Records reviewed by ICIJ describe detainees in isolation mutilating their genitals, gouging their eyes, cutting their wrists and smearing their cells with feces.

‘People were being brutalized,’ said Ellen Gallagher, a supervisor within the U.S. Department of Homeland Security who has tried for years to sound the alarm within the federal government about abusive use of solitary confinement by ICE, a DHS agency.

She has never been so deeply disturbed by a professional matter, she said. ‘I lost sleep. I cried,’ she said.

Speaking publicly for the first time, Gallagher said she believes ICE’s use of solitary confinement ‘rises to the point of torture.'” 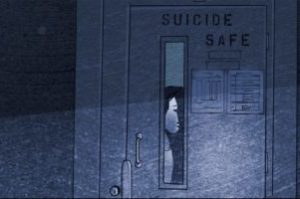