From NPR: “Not every hospital sues over unpaid bills, but a few sue a lot. In Virginia, 36% of hospitals sued patients and garnished their wages in 2017, according to a study published Tuesday in the American Medical Association’s journal, JAMA. Five hospitals accounted for over half of all lawsuits — and all but one of those were nonprofits . . .

‘Hospitals were built — mostly by churches — to be a safe haven for people regardless of one’s race, creed or ability to pay. Hospitals have a nonprofit status — most of them — for a reason,’ says Martin Makary, one of the JAMA study’s authors and a surgeon and researcher at Johns Hopkins Medicine. ‘They’re supposed to be community institutions.’ . . .

As a result, she says, nonprofit hospitals have ‘a lot of free rein to make up their own policy of what they think is appropriate.’

‘Hospitals sometimes can legally sue their patients for medical debts,’ Bosco says. ‘The question is whether that’s something that they should be doing.’

For Makary, as a doctor, the answer is simple: ‘It’s a disgrace every place where it happens,’ he says.

[Daisha] Smith is unflinching when she talks about Mary Washington and what happened to her after she went to the hospital in 2017.

At the time she didn’t have insurance. She was working part time at Walmart for $11 an hour. She doesn’t want to give the details about why she ended up at the hospital. ‘I was not myself,’ she says. ‘So I walked myself into Mary Washington to get help — to get myself on track.’ She says she was admitted for two weeks.

Smith says no one told her about the financial assistance program or talked to her about her bill. According to the hospital’s policy, someone making less than $25,000 without health insurance should qualify for ‘free care.’ But the hospital sued her for $12,287.68. She had a default judgement against her and did not realize she had been sued until she saw her paycheck mysteriously disappearing.

‘When I looked at my pay stub, I’m like, “Why do I only have like $600-something in my account?” ‘ She noticed ‘garnish’ written on the bottom of her pay stub. ‘So I called my company and asked them, “Who’s garnishing my check?” ‘ They told her it was Mary Washington.

‘And that’s crazy,’ she says, shaking her head. To Mary Washington Hospital, she says: ‘People need help. You all are just money hungry.’ ” 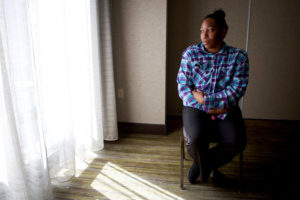