From Big Think: “The late and great ethnobotanist and writer Terence McKenna had a rich and first-hand experience with many shamanic tribes. Throughout his years of psychedelic study and incursions into far-flung realities with Amazonian tribes, he found a rich tradition of integrating the so-called mentally disturbed into elevated positions that were fundamental to the well-being of primitive societies. He states:

Other societies are not so frightened by the prospect of madness or even certified psychosis.

‘A shaman is someone who swims in the same ocean as the schizophrenic, but the shaman has thousands and thousands of years of sanctioned technique and tradition to draw upon,’ writes McKenna.

‘In a traditional society, if you exhibited “schizophrenic” tendencies, you are immediately drawn out of the pack and put under the care and tutelage of master shamans. You are told: “You are special. Your abilities are very central to the health of our society. You will cure. You will prophesy. You will guide our society in its most fundamental decisions.”‘

McKenna compares this to how we deal with schizophrenia.

‘Contrast this with what a person exhibiting schizophrenic activity in our society is told. They’re told: “You don’t fit in. You are becoming a problem. You don’t pull your own weight. You are not of equal worth to the rest of us. You are sick. You have to go to the hospital. You have to be locked up.” – You are on a par with prisoners and lost dogs in our society. So that treatment of schizophrenia makes it incurable.’

These different systems for dealing with an undeniable part of the human condition can help us pave the way for a future that doesn’t demonize or ignore a fundamental personality aspect for many people.” 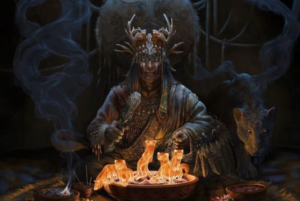