From Motherly: “Higher self-esteem, improved academic performance, better parent-child communication, and fewer psychological and behavior problems have been linked to [parental warmth and] affection. On the other hand, children who do not have affectionate parents tend to have lower self esteem and to feel more alienated, hostile, aggressive, and anti-social.

There have been a number of recent studies that highlight the relationship between parental affection and children’s happiness and success.

In 2010, researchers at Duke University Medical School found that babies with very affectionate and attentive mothers grow up to be happier, more resilient, and less anxious adults. The study involved about 500 people who were followed from when they were infants until they were in their 30s. When the babies were eight months old, psychologists observed their mothers’ interactions with them as they took several developmental tests.

Then 30 years later, those same individuals were interviewed about their emotional health. The adults whose mothers showed ‘extravagant’ or ‘caressing’ affection were much less likely than the others to feel stressed and anxious. They were also less likely to report hostility, distressing social interactions, and psychosomatic symptoms . . .

Then in 2015, a study out of the University of Notre Dame showed that children who receive affection from their parents were happier as adults. More than 600 adults were surveyed about how they were raised, including how much physical affection they had. The adults who reported receiving more affection in childhood displayed less depression and anxiety and were more compassionate overall. Those who reported less affection struggled with mental health, tended to be more upset in social situations, and were less able to relate to other people’s perspectives.” 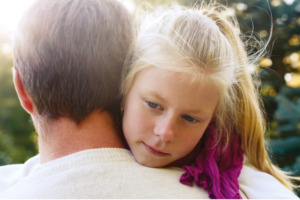