From The Guardian: “MANI [Mentally Aware Nigeria Initiative, a burgeoning user-led organisation fast emerging as a multi-pronged solution to Nigeria’s mental health crisis] was launched in 2016 by Victor Ugo, a then medical student from Lagos who had suffered from depression, as a response to the lack of mental health support in Nigeria, where an estimated 7 million people have the same condition.

Ugo’s vision was to drive change by raising awareness and dispelling stigmas that exist around mental health issues in Nigeria. And on Wednesday, he will appear at the annual Goalkeepers event on the sidelines of the UN General Assembly in New York, to make the case for more funding and fairer treatment for mental health.

‘If you have depression,’ says Latifah Yusuf Ojomo, the deputy head of MANI’s Lagos team, ‘people can cast you as mad, which means that the majority of people who have mental health issues in Nigeria do not understand, or want to accept what they are feeling.’ . . .

MANI’s volunteers come from a diverse range of backgrounds . . . Ekene Okeke, from Lagos, has a background in sociology and criminology. After suffering from depression and connecting with MANI on Twitter, she decided to volunteer for it. Okeke was recently called out on an emergency where a woman had high levels of anxiety and had been alone for several days. ‘I dropped what I was doing, and spent hours talking with her, I even went and bought her ice-cream.’ It’s moments like this, Okeke says, that make volunteering so rewarding: ‘In the end, the woman was able to calm down and has since reached out for help.’

Informal mental health support networks like this are becoming more prevalent around the world, as people realise that health systems cannot cope with mental illness, and that society will have to come up with other strategies. Examples include park bench psychotherapy in Zimbabwe, a peer-support initiative in Kenya, community-based self-help in Pakistan and the Phola organisation in South Africa.'” 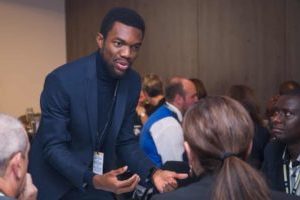