From Yale School of Medicine: “A new Yale-based program will help researchers better understand how some people can exert control over their voice-hearing experiences in order to help live fully functional and productive lives.

The Yale COPE (Control/Influence Over Perceptual Experiences) Project is co-directed by Al Powers, MD, PhD, and Brittany Quagan, MS, LPC. Powers is an Assistant Professor of Psychiatry at the Yale School of Medicine and Medical Director of the Yale PRIME Psychosis Prodrome Research Clinic. Quagan is a therapist at the PRIME Clinic, Powers’ lab manager, and a person with lived experience of voice-hearing.

Between 5 and 13 percent of people in the general population hear voices, and many do not require the help of a psychiatrist to function and achieve their personal goals. A part of this may be related to the ability of some voice-hearers to influence the frequency, onset, and offset of their voice-hearing experiences.

‘I only experience voices when I want to. I can turn them off and keep them off until and if I decide I want to talk to them,’ Quagan said of her personal experiences with voices. ‘It wasn’t always that way, though. Once I learned it was even possible to influence my voice-hearing experience, I put effort into developing that skill. It changed my life.’

The researchers have developed the first scale to measure control over voice-hearing. Development of the scale was led by Catalina Mourgues, PhD, a research fellow in Powers’ lab, and informed by dozens of interviews with people both with and without a psychiatric diagnosis who hear voices and have developed the ability to exert control over those experiences. Through the use of an online survey and interviews, the COPE Project will aim to validate this scale and learn more about the development of these skills and how they change over time. The researchers hope to translate that knowledge into new treatments for people suffering from distressing voices.

‘What we’re doing together really has the potential to change things for people who need help exerting control over their experiences,’ Powers said. ‘The goal is not necessarily to get rid of the voices but to empower voice-hearers to influence those experiences and maximize their ability to do what they need to in their lives.’

Toward this goal, Powers and Quagan have assembled a team of collaborators they call the SPIRIT Alliance. Represented on the team are neuroscientists, therapists, mental health professionals, mental health advocates, people in the recovery movement, and people who view their experiences as spiritually oriented.

They aim to recruit at least 1,000 voice-hearers from around the world for the project, which launched on World Hearing Voices Day, September 14, 2019. 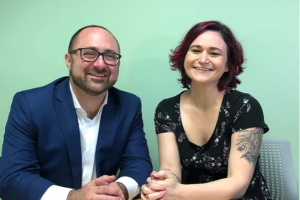