From Pursuit: “The process by which sexual objectification is psychologically harmful to women was first described by psychologists Barbara Fredrickson and Tomi-Ann Roberts in the mid-1990s.

According to Fredrickson and Roberts’s theory, when women are treated as objects, they momentarily view their own bodies from the perspective of the person objectifying them – becoming preoccupied with their physical appearance and sexual value to others.

This process of so-called ‘self-objectification’ causes women to experience unpleasant feelings and, according to the theory, if repeated it eventually leads to long-term psychological harm.

But, despite hundreds of studies on the psychology of sexual objectification, convincing evidence of the process described by Fredrickson and Roberts has been lacking.

That is, until now.

We believe our research, conducted with colleagues in the US, is the first to demonstrate that when women are exposed to sexually objectifying events in their everyday lives, even when they aren’t the primary target, they become more preoccupied with their physical appearance.

This, in turn, leads to increases in negative emotions such as anxiety, anger, embarrassment and shame.” 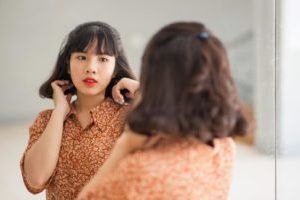