From KSFR, Santa Fe Public Radio: “This is one woman’s extremely powerful story of how fighting one war, led to fighting another of a different sort: Polypharmacy and overmedication. And both nearly took her life. She’s found a new mission in life: To help all who suffer from Post Traumatic Stress and give voice to an invisible population and another experience that can kill. Thirty percent of all people are estimated as overmedicated, defined as being on more than 5 drugs at a time, and in our elderly population some studies estimate a rate of 67%. Consumer reports states ‘The amount of harm stemming from inappropriate prescription medication is staggering. Almost 1.3 million people went to U.S. emergency rooms due to adverse drug effects in 2014, and about 124,000 died from those events.’

Former Sergeant Angela Peacock is a woman who has dedicated her life and her own survival to educating and helping others and is the definition of a true hero.” 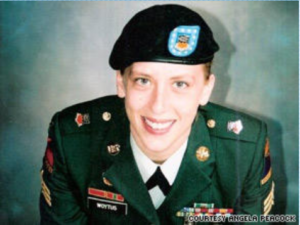