A new study, published in The Journal of Constructivist Psychology, explores the process mindfulness teachers undergo when learning to embody the practice.  Embodiment, a concept considered essential in learning and teaching mindfulness, is understudied in the field of mindfulness, especially in the school-based mindfulness literature. The current study presents one of the first attempts to understand the process of learning and embodying mindfulness. The study authors, led by Angelique Villasanta from Ateneo de Manila University in the Philippines, explain:

“Although adapted into several manualized interventions, people do not experience and understand mindfulness in a singular way. When experienced practitioners of mindfulness speak of their practice, they often describe it as being a journey that entailed shifts in meanings and is often intertwined with their personal and professional lives.”

Mindfulness has been defined as “Awareness that arises through paying attention, on purpose, in the present moment, non-judgmentally.” And has been touted to reduce stress, prevent depression relapses, decrease anxiety, and as a method for coping with suicidal ideations. It has been theorized that mindfulness leads to these improved outcomes through increased self-compassion, reductions in experiential avoidance, and an improved sense of meaning in one’s life.

“Unlike other interventions that require only skillful facilitators, MBIs are unique in that they also necessitate a certain way of being or embodiment among its facilitators. Above professional requirements, a deep and personal mindfulness practice is essential to ensure mastery, integrity, and fidelity to the intervention.”

Villasanta and colleagues argue that the integrity of mindfulness programs are primarily dependent on the facilitator. In addition, research suggests that participants in mindfulness training programs see the particular characteristics of the teacher as essential to their learning. The authors quote the founder of MBSR, Kabat-Zinn, as saying:

The current study attempts to understand the process of embodying mindfulness through qualitative interviews with public school teachers and counselors that have completed formal teacher training programs in mindfulness. After screening participants who met inclusion criteria, seven teachers and counselors from Filipino public schools were included in the study. Participants were asked to “narrate their journey into mindfulness” and were invited to share where their “mindfulness journey” started for them.

After analyzing the participant’s explanation of their mindfulness journey, three clear paths emerged: the struggling path, the mechanical path, and the receptive path.

The struggling path is characterized by wrestling with key mindfulness concepts such as acceptance and non-judgment.

“In this path, the dominant position can be seen as held by the disciplinarian voice whose inherent tendency is to categorize and label the behavior of children as good or bad.”

The mechanical path is one that does not include a turn inward and a willingness to reflect on one’s own experiences. On this path, mindfulness is seen merely as a tool.

“The mechanical path was characterized by a lack of an introspective voice. Instead, there was the subject teacher’s voice learning mindfulness as a piece to be memorized. This path ends with mindfulness as a subject, a task, an exercise.”

Finally, the receptive path is understood is characterized by an openness to the experience of mindfulness.

The current study highlights the different ways that mindfulness training impacts educators and suggests that becoming an effective mindfulness teacher may involve a journey of self-reflection, which embodies you to embody the practice. The authors argue:

“It is in the willingness to accept a new self/identity that comes with the practice of mindfulness and a simultaneous letting go of old selves/identities that do not resonate with the meaning of mindfulness that practice becomes embodiment.” 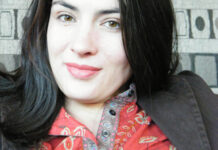 Why I Got Locked Up in the Madhouse (Twice)