From Monthly Review: “Matthews concludes that over fifty years later, Baran and Sweezy’s expectations as to ‘the spread of increasingly severe psychic disorders’ in late capitalism has been proven correct.6 Indeed, so deep is the mental health crisis—viewed in the broadest terms—in the United States today that, as Nicholas Kristof and Sheryl WuDunn observed in the New York Times in January 2020, life expectancy in the United States has ‘now fallen three years in a row, for the first time in a century,’ attributable to deaths of despair from alcohol, drugs, and suicide, largely affecting working-class populations. What Baran and Sweezy, writing during what is still widely considered to be the most successful period of U.S. capitalism, saw as the trend toward the psychological dissolution of working-class families and individuals has, in the present era of capitalist failure, become nothing less than a ubiquitous cancer responsible for the decline of whole communities . . .

In addressing the state of mental health in monopoly capitalism in relation to class, Baran and Sweezy also addressed it in relation to race, arguing that the forms of social repression imposed on working-class communities in the United States fell especially heavily on the black population. Here they drew on James Baldwin’s The Fire Next Time, closing their chapter with his famous words: ‘There is simply no possibility of a real change in the Negro’s situation without the most radical and far-reaching changes in the American political and social structure.’ But they took the argument one step further, arguing that a general revolution instigated by both the black and white working class was necessary, and the principal force for change came from the former.” 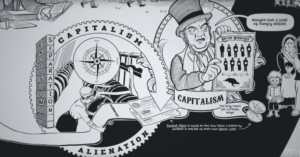