From Psyche: “Rather than exposing a generally irrational or dysfunctional reasoning process, the new theory suggests that delusions might emerge from specific processes in our ‘coalitional psychology’ – the set of cognitive mechanisms that have evolved to help us understand our social environment. These processes help us live and cooperate with others by understanding their intentions, the groups and allegiances that other people form, and our positioning within these groups.

. . . Considering the social role of beliefs, delusions become easier to understand. For example, persecutory delusions are consistently higher in people who have been bullied, or in marginalised groups such as refugees. If you have been repeatedly threatened or abused, it makes sense to be wary of people in the future. Therefore, rather than persecutory delusions being ‘irrational’, in many cases they are a direct response to sustained coalitional threat in a person’s environment. Similarly, grandiose beliefs might function to increase engagement in the social environment by staving off depression in the short term.” 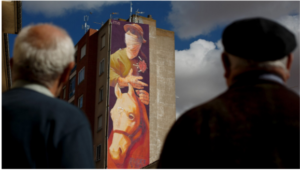