From Elemental: “The brainchild of husband and wife duo Stan Grof, MD, and Christina Grof, MD, holotropic breathwork is an intense breathing technique that can allegedly induce a psychedelic state as powerful, vivid, and potentially life-changing as any substance. The Grofs were some of the original psychotherapists using LSD to treat various psychological disorders in the United States. While they (and many others) saw huge success with this method, LSD and similar hallucinogens were banned by the U.S. government in 1968, making it illegal to use them as treatment.

Many psychotherapists gave up on psychedelic healing at that point, but the Grofs began searching for a legal alternative to LSD that might match its efficacy. What they found was that, through certain breathing techniques, a person could reach a fully hallucinogenic state — and that in this state, emotional and psychological healing could occur. They named this discovery holotropic breathwork after the Greek words ‘holos,’ meaning ‘whole,’ and ‘trepein,’ meaning ‘to move toward.’ In other words, ‘moving toward wholeness.'” 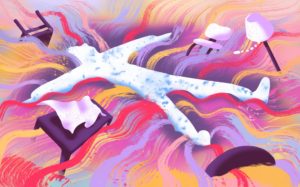