From The Imprint: “Screening for adverse childhood experiences has been met with growing concern among health researchers and child welfare experts in the U.S. and abroad. While few doubt that severe stress in childhood can lead to ailments later in life, tools such as PEARLS used during doctors’ appointments are described in prominent scientific journals as inappropriate and unethical, oversimplifying human experience and straining doctor-patient trust. Critics also warn that answers on the forms could lead more families in low-income and Black and brown communities to become entangled with child welfare authorities. What’s more, physicians who aren’t familiar with trauma may inadvertently harm patients by the very nature of the questions, and their sensitivity . . .

The surgeon general acknowledged critics’ concerns, but said those arguing with the screening approach haven’t offered up any alternatives. And failing to screen, Burke Harris said, is tantamount to saying: ‘Let’s just wait until they’re so badly off that they can’t sit still in a class anymore and learn. Let’s wait until their executive functioning is so impaired that they now become part of our justice system, or let’s wait until their health gets so damaged that they become part of the statistics of Black and brown lives that are foreshortened because of toxic stress.'” 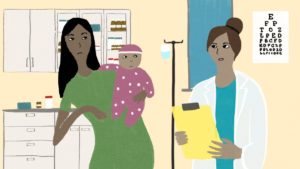