From Slate: “Linden Cameron, who is white, is currently hospitalized with injuries to his shoulder, ankles, intestines, and bladder, according to a GoFundMe page his mother set up.

Cameron’s mother, Golda Barton, told local CBS affiliate KUTV that she called the police to report that she needed a crisis intervention after her son, who has Asperger’s, struggled with ‘separation anxiety’ at her need to return to work.

According to Barton, two police officers came to her home, told her to wait inside, and then one of them shot Cameron repeatedly within five minutes of arriving after he fled.

[Barton] thought her son was dead and the officers didn’t immediately say if he was or was not dead. They handcuffed him, according to Barton. Additionally, she said she heard from someone that the other officer could be seen grabbing his own head in disbelief for what had happened. He said out loud, according to what the mother was told, ‘He’s just a child, what are you doing?’ . . .

The shooting occurred as protests raged across the country over the police killing of Daniel Prude in Rochester, New York. Prude, a 41-year-old Black man, was also in the middle of a mental health crisis when police killed him. Like Cameron’s mother, Prude’s brother was the one who initially called 911 to get him help. It is not unusual for police to kill people with mental disabilities or illness; the Washington Post estimated that a quarter of people killed by police in the U.S. were in the throes of a mental or emotional crisis.”

From The Guardian: “Regarding the incident in Salt Lake City, Neurodiverse Utah said in a statement: ‘Police were called because help was needed but instead more harm was done when officers from the SLPD expected a 13-year-old experiencing a mental health episode to act calmer and [more] collected than adult trained officers.'” 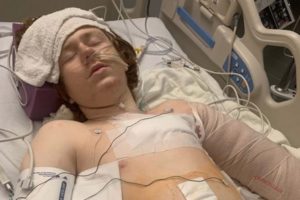