From VICE: “For many, calling 911 or going to the hospital might seem like the only options in this situation. Instead, Baird and her family doctor reached out to the Gerstein Crisis Centre, a 24/7 support community and mobile team in Toronto for people experiencing addiction and mental health crises. It’s one of the only programs of its kind in Canada. They aren’t cops, doctors, or social workers. They’re trained in nonviolent de-escalation to help people find solutions in moments of peril and beyond. Many Gerstein staff are survivors themselves, peers who understand emotional crises firsthand.

While the centre has gained a solid reputation within health and legal circles in the 30 years since it opened, it’s largely flown under the radar. Those who work there haven’t spoken with journalists much before, but they are doing so now as debates over defunding the police and reimagining responses to mental health crises are taking place around the world. Gerstein’s services are in higher demand, and they see their model as a template as more and more cities look to reduce police involvement in mental health incidents and redirect police budgets into community resources. 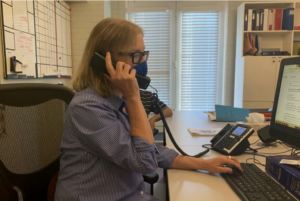