From DW Documentary: “Asia’s largest psychiatric facility . . . the Bilquis Edhi Centre in north Karachi, is home to 1700 women . . .  Many were victims of violence—beaten by their husbands, mistreated by their in-laws, they lived in constant fear of being rejected and thrown out. Now they live with the stigma that they alone are responsible for the failure of their marriage.

In Pakistan’s deeply conservative society, a woman is considered nothing without her husband, and without a family. That drives many women into depression. The Bilquis Edhi Centre is often the only place where such women can find refuge. Run by an NGO called the Edhi Foundation, it’s the only psychiatric hospital in Pakistan that offers its services for free. Most of the women living here are cut off from all family ties. The people outside consider them locked away—like ‘ghosts’ whose appearance induces horror and fear.” 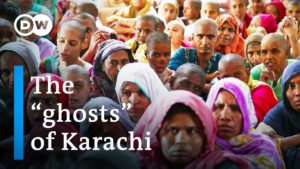