From STAT: “Weeks after it was scrubbed from the Journal of the American Medical Association’s website, a disastrous podcast — whose host, a white editor and physician, questioned whether racism even exists in medicine — is surfacing complaints that JAMA and other elite medical journals have routinely excluded, minimized, and mishandled issues of race.

Critics say such ideas, published in powerful journals that doctors look to for leadership and education, are serving to perpetuate and entrench health inequities that have long harmed and shortened the lives of many people of color.” 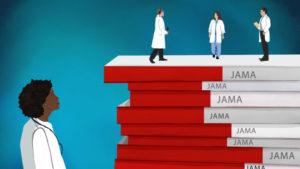