A recent study published in Frontiers in Psychiatry examines the value and meaning derived from participating in Hearing Voices Groups (HVG’s) from the perspective of service users in the Netherlands.

Led by Barbara Schaefer of Parnassia Psychiatric Institute, the research team employed a qualitative approach, conducting 30 interviews with service users across 8 HVG’s in the Netherlands, ranging from urban to rural settings. The findings revealed that what creates the most meaning from HVG’s is peer-to-peer validation, the exchange of information and self-accumulated knowledge, connection and social support, and the opportunity to engage in self-reflection.

Further, a group-level analysis revealed three major factors contributing to participants’ experiences, such as the style of the facilitators and the interaction between group processes and individual processes. Schaefer and her co-authors explain:

“Although similar group processes may take place in other peer-based interventions, it seems that the specific characteristics of HVGs—no attendance limits or obligations, group ownership, and the acceptance of various perspectives on the origin and meaning of the voices heard—optimize these processes and create an ideal context in which voice-hearers benefit in different ways.” 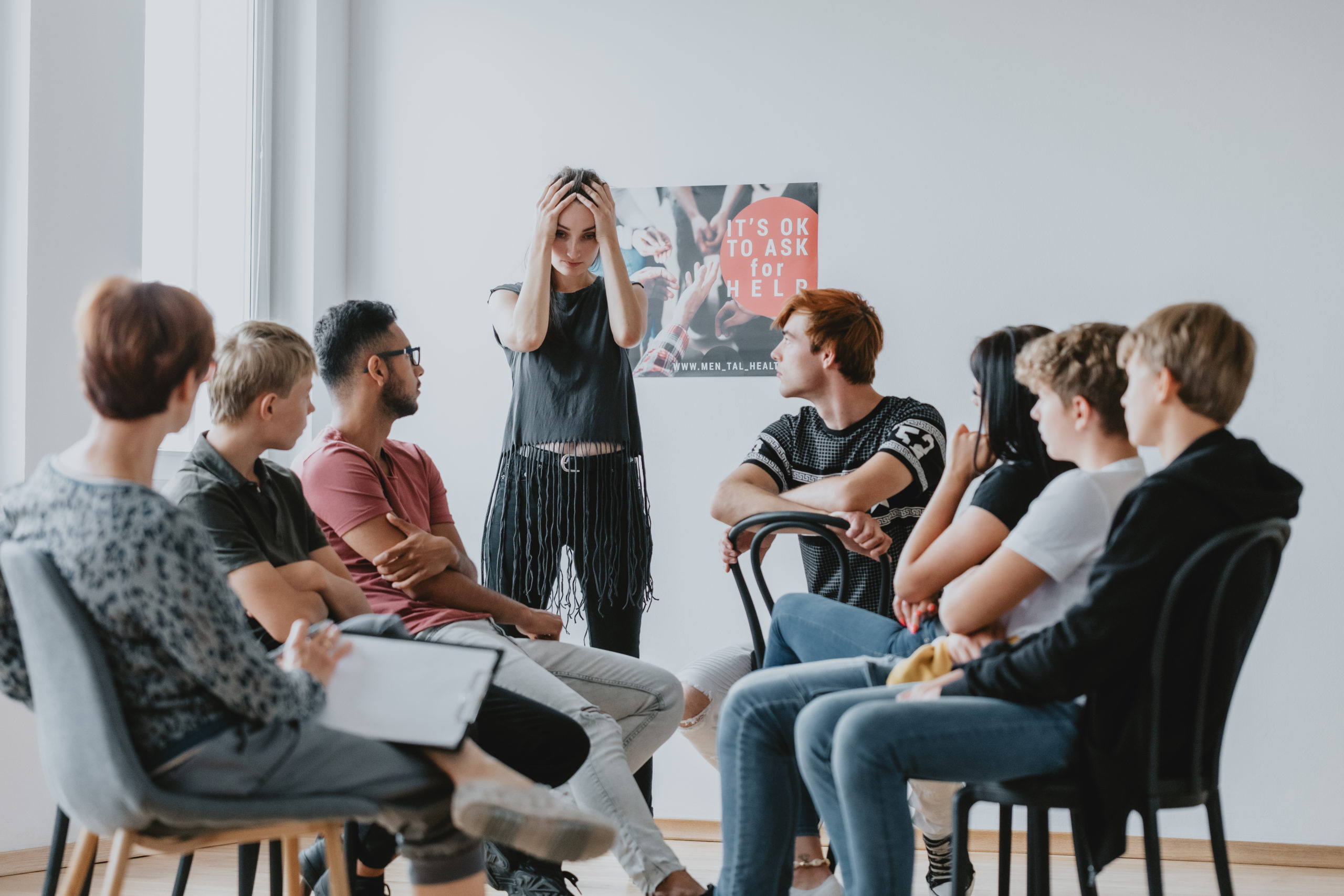 The first HVG was established in the Netherlands in 1987 to respond to service users longing for a place to express and make sense of their experiences with hearing voices. About 13% of the general population has heard one or more voices during their lifetime. Some are not bothered by the voices, some even see them as helpful, and some people suffer greatly from hearing voices.

HVG sought to fill a gap in care, as a relatively small proportion of voice-hearers will seek professional help. The Hearing Voices Movement that soon followed HVG’s offers an alternative to the traditional biomedical and cognitive-behavioral framework of hearing voices. The authors write:

“HVGs differ from regular psychoeducation and group therapy in that they have a focus on group ownership rather than following a predetermined, guideline-based structure. All HVG participants are considered experts due to their lived experiences. Thus, no single expert exists, and all group members are experts.”

Extant literature shows that non-drug therapies such as HVG are associated with feeling supported, developing coping strategies, improving own understanding of the voice-hearing experience, and boosting self-esteem and confidence. However, the authors point out that the majority of these studies report on relatively small sample sizes.

With an increased focus on recovery-oriented care and social inclusion for severe mental illness, HVG’s hold great potential to meet more of the needs of those who hear voices and are often socially outcasted or untreated.

However, mental healthcare professionals find it difficult to refer people who hear voices to HVG’s due to a lack of clarity about what “evidence-based” contributions these groups offer. This study aimed to fill that gap by gaining insight into the value that participating in HVG’s offers from the perspective of service users.

The lead researcher interviewed 30 service users across 8 different HVG’s in the Netherlands. The interviews consisted of three phases. Participants were first invited to tell about their experiences with HVG, describe possible changes since joining, what they have gained in attending, and what they liked or disliked about the group. The final phase of the interview asked what participants found most important about attending a group and what they would recommend to facilitators starting a new group.

The results of the analysis found that 4 meaningful processes emerged at the individual level, and a group analysis examined what contributes to the group process overall.

The non-clinical setting of HVG’s was reported as feeling like a safe space. Before joining the group, many participants did not realize others heard voices, making them feel “different” and “alone.” The authors write:

“Awareness of the existence of HVGs opened a new world of opportunity for the participants: this was an opportunity to break the silence they had found themselves living with for years.”

The peer-to-peer validation encouraged enlightening, liberating, and shame-reducing thoughts for participants. The group was often described as the first place where participants could share without fearing negative consequences, such as being laughed at or concerns of not being taken seriously. One participant powerfully shared:

“So, the hearing voices group is mainly. . . meeting each other and talking about the voices, right. . . That is something special for many people, for me too. That you can just talk about it with others. . . outside of this group, that’s hardly possible. I told a friend about the voices. . . but he doesn’t really understand. These people [in the HVG group] know what it is, and so. . . that makes a big difference. I’ve had many therapists, and they couldn’t handle voices. They didn’t know what to do about it and were not interested. Sometimes we tried. . . but that [their methods] didn’t work out at all. . . So, you remain lonely and alone in that sense.”

A vital component of the group is that many perspectives are accepted and not told they are “wrong” for having their own ideas regarding the origins of the voices. In part, this is accomplished by introducing the group as a peer-led group rather than a therapy group where facilitators and participants are inherently placed in a hierarchy.

While peer-to-peer validation created the safe space to discuss their experiences with hearing voices openly, the content of the discussions often led to valuable exchanging of information and sharing knowledge based on one another’s lived experiences. While professionals and online resources might provide some of this, the nuance of learning from one another about the unique ways that people cope, or have struggled to cope, stimulates the group to actively find new ways of coping or trying out different strategies that may have felt strange to them initially.

As the group progresses, participants who have been dealing successfully with voices for an extended period find meaning out of sharing self-accumulated knowledge with others and “give back” to the group.

Additionally, the fact that participants decide the focus of the group allows for group agency. One participant provided valuable feedback about a facilitator who came to the meeting after looking up videos online about brain scans of people who hear voices. This participant said:

“Last time I didn’t like the subject very much. It was about hearing voices, and then the facilitator had been looking up things on the internet, and I found this wasn’t too relevant. I usually deal with the voices in a practical way. . . trying to find solutions. . . and then I want to have tips [for dealing with them practically].”

This quote provides valuable feedback about the ideas and resources that facilitators and professionals may deem useful for clients. Because participants determine the topic for the meetings together, the exchange of information allows for professional and academic knowledge while participants provide insight with their lived experiences about what they actually need and what is actually helpful to them that day.

Given that those who hear voices often have limited social support, HVG’s serve the basic human need for interpersonal contact. This contact combats the feeling of isolation, which can be healing in itself. The authors add:

“What is clear in participants’ stories is that based on togetherness and support, the bond between members of a group gradually grows and can lead to intense feelings of solidarity.”

If a group is stable and members can continue through the process together, there is potential to build deep social connections and build towards deeper levels of sharing and providing personalized feedback. The impact this can have on participants is often restoring their hope in humanity and a willingness to reinvest in social connections with other people after often experiencing so much rejection.

Since HVG’s are open groups, participants can attend as long as they like and are often allowed to invest in each other outside of the group, forming friendships through going for a walk, getting a drink, or engaging in a shared hobby together. Further, this allows for building social skills with others outside the group.

Engaging in Mutual Self Reflection

The final process that emerged from the findings concerns the relational process that arises when members are asked follow-up questions to gain more insight into their lived experiences. This kind of sincere probing creates a space that voice hearers do not always find, in which they can verbally reflect on their own experiences and become more aware of how the voices influence their lives, possible triggers, and even help the participant challenge pre-existing beliefs that are limiting their own healing. The authors describe the impact of this:

“As a result, participants may alter their perceptions about hearing voices and how they interpret voices; they might begin to take actions that originate from a personal reflection process instead of trying a coping strategy just because someone says it might work.”

However, the authors note again the within-group differences that not everyone finds it helpful to explore and gain insight about their voices’ significance. Some members restrict their participation strictly to sharing and hearing experiences.

Lastly, the authors conducted a group-level analysis which revealed the impact of the unique style of the facilitators and the interaction between group process and individual process.

“An experiential expert understands well what voices are, and they can also tell you how they did things themselves. Uh. . . but a professional expert is good at bringing up themes. . . is good at. . . well, structuring. . . And they know a lot about symptoms and can immediately tell you. . .what could be the cause and whether it is normal. I notice from the group. . . I notice myself. . . I feel more secure when there is a professional expert present [than only an experiential expert].”

Other times, there was a conflict between the group process and an individual’s process. The ethos of the Hearing Voices Movement contextualizes hearing voices as a normal human variation and is not necessarily indicative of a disease. While this can significantly help participants challenge the societal stigma that those who hear voices must be mentally unstable, some participants have been influenced by the dominant biomedical model and feel greatly attached to their diagnosis. Therefore, they find it difficult not to see their voice-hearing as a disease, and this can cause restlessness within the group or a desire to leave.

Participants are in various stages across the lifespan with different perspectives of their voice-hearing. The group-level findings suggest that all participants need validation and desire to investigate if groups are to their advantage or not based on their own process.

The authors close with clinical implications for mental health professionals and urge the following message about the importance of HVG’s for the recovery process:

“The natural, spontaneous, and dynamic processes of an HVG deviates from what people are used to in treatment groups in mental health care (MHC), which often use strict protocols. Creating free spaces can be valuable to the recovery process because it helps people investigate their problems together, rather than alone, without the pressure of judgment and predetermined goals and strategies. MHC professionals should be more aware of the benefits HVGs offer to voice-hearers.”