In a new article published in Psychosis: Psychological, Social, and Integrative Approaches, Gail Hornstein from Mount Holyoke College and her colleagues investigate how hearing voices peer support groups (HVGs) work for a diverse range of participants.

Hornstein identifies six themes she believes are integral to the efficacy of HVGs: prioritizing self-determination, de-emphasizing behavioral targets and pressure to change, respecting multiple frameworks of understanding, non-judgmental curiosity through organic dialogue with nothing “off-limits,” egalitarian collaboration among members, and fostering genuine relationships inside and outside of meetings.

“These groups seem able to serve multiple functions simultaneously, thereby allowing individuals with diverse needs to get them met in the same context,” Hornstein writes. 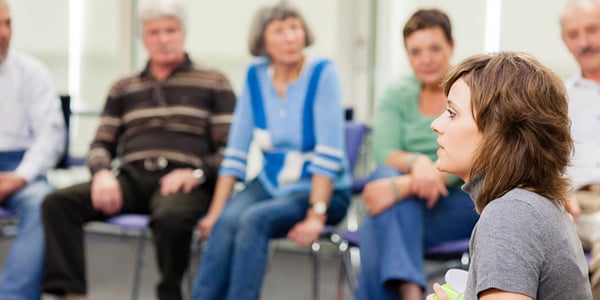 Although biomedical explanations for psychosis are still common, researchers are presenting more evidence that solely medication-based treatments for psychosis are likely less effective and have far more side effects than initially thought.

As the biomedical explanations for psychosis come under increasing scrutiny, many therapists and service users are seeking non-drug therapies to alleviate mental suffering. The use of non-drug therapies like Hearing Voices Groups (HVGs) is associated with service users feeling more autonomy and less skepticism about treatment and alternatives to medication have shown promising results in early research.

Prior research has established that HVGs can improve social and emotional well-being among members while promoting overall positive changes in their lives. HVGs can also offer alternative, non-pathologizing narratives for voice hearers, allowing them to understand hearing voices in their own terms rather than adopting the stigmatizing biomedical view of psychosis as a brain disease.

The current research began with an open-ended questionnaire examining 111 HVG participant’s voice-hearing histories, experiences within the group, and impact of group participation. The researchers then selected 15 participants representing the diversity of experience present in the original sample to participate in more in-depth follow-up interviews.

Hornstein and colleagues then performed a phenomenological analysis to identify the essential qualities of the participant’s experience. The result was six themes identified as essential to the efficacy of HVGs: prioritizing self-determination, de-emphasizing behavioral targets and pressure to change, respecting multiple frameworks of understanding, non-judgmental curiosity through organic dialogue with nothing “off-limits,” egalitarian collaboration among members, and fostering genuine relationships inside and outside of meetings.

HVGs emphasize self-determination by allowing members to attend however frequently they would like with no outside referral necessary. Participants may interact with others or maintain silence and are encouraged to explore any topics they choose in whatever way they find helpful.

These groups encourage members to set goals for themselves, but they do not judge or police these goals. There is no prescribed structure or path for self-improvement inherent in the logic of HVGs, and behavioral targets and pressure to change are de-emphasized in favor of exploring the complexities of the voice-hearing experience.

Participants are encouraged to understand their voice-hearing experience on their own terms, and no one narrative is emphasized over any other. This means the biomedical explanation of voice-hearing is on equal footing with the alien-implanted technology explanation during these meetings. There is a strict rule that participants do not criticize each other’s narrative around voice-hearing.

HVGs help stimulate curiosity around psychological life by allowing participants to question atypical experiences and unusual understandings of more common experiences. While nothing is off-limits, the group also encourages non-intrusion. You may ask any question, but silence is considered as legitimate an answer as a full and detailed explanation.

Egalitarian collaboration emanates from the view that each member is an “expert by experience.” Therefore the facilitators take no leading role during the meeting but rather model the values of inclusiveness and democracy. All views are accepted, and none are privileged, whether they come from grizzled experts or brand-new participants.

These groups also emphasize the formation of genuine relationships both within and beyond the group meetings. The sharing of personal contact information between facilitators and participants is common, and fostering friendships is important for the group to positively affect its members. There is also an ethos of confidentiality present in these relationships as group members will not seek outside intervention in any circumstance unless requested.

The authors believe these six features of HVGs allow them to function effectively for a hugely diverse group of people by offering a unique constellation of support not present in any other form of therapy. HVGs offer qualities similar to 12-step programs in that they are not time-limited, and participants can come however often they please. Still, HVGs are more improvisational, allow members to tell their stories in any number of ways, and do not prescribe one single narrative through which to view the voice-hearing experience.

HVGs also have some things in common with psychotherapy in that they both encourage the exploration of meaning in difficult experiences. However, HVGs do not assume any pathology on the part of the participants and allow for more organic “crosstalk” between members than the traditional psychotherapeutic structure.

The author concludes that HVGs offer several unique approaches that are invaluable in understanding voice-hearing. Not only can these groups be effective on their own, but “it may well be that participating in these groups can equip voice hearers to make use of mainstream services with a greater degree of self-determination, allowing for a richer experience across multiple domains.”

The authors acknowledge that in using a phenomenological analysis, it is possible to miss functions of the HVGs in their participant’s narratives due to the participant’s inability to articulate them. Hornstein and her colleagues also acknowledge that the 15 participants called for the follow-up interviews may not have represented the full depth of experience present in the HGVs.

The current research examines how HVGs help their participants. By prioritizing self-determination, de-emphasizing behavioral targets and pressure to change, respecting multiple frameworks of understanding, non-judgmental curiosity through organic dialogue with nothing “off-limits,” egalitarian collaboration among members, and fostering genuine relationships inside and outside of meetings, HVGs allow their participants to understand their experience in a way that is meaningful and useful to them while providing a social support system of others with similar experiences.