From The National: “Only later when under investigation for war crimes would Dr. John ‘Bruce’ Jessen, one of the two contract psychologists who helped design these CIA ‘enhanced interrogation techniques’ at Bagram, tell questioners that ‘the atmosphere was very good … nasty but safe.’

Jessen’s words are haunting, and might have come straight from the lips of a very distinguished yet notorious psychiatrist predecessor, Dr. Ewen Cameron.

Which takes us back to the town of Bridge of Allan, for it was there on December 24, 1901, that the man who would become one of the world’s most eminent psychiatrists was born, destined for an ‘illustrious’ career that ultimately fell into disgrace.

‘Patients called him the “eminent monster” and that stuck with me,’ says Stephen Bennett, as we sit in a Glasgow cafe talking over the documentary about Cameron’s life the filmmaker has taken years to shoot, direct and bring to the screen at the Glasgow Film Theatre (GFT) on March 3.

Indeed, the film takes its title – Eminent Monsters – from that chilling nickname given to Cameron and those like him. All were psychiatrists and psychologists engaged in experiments on patients that helped devise systems of torture employed by military and security services across the globe, from Northern Ireland and Guantanamo Bay, to the CIA’s dark sites like that at Bagram.

In the course of developing his own barbaric practices, Cameron would sometimes destroy the lives of his unsuspecting patients while changing the course of psychological torture forever.” 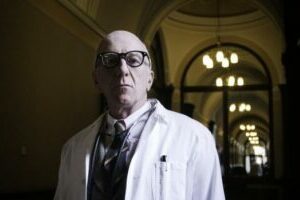